What they don’t teach you in schools

English for Indians: What They Don’t Teach You in Schools

“It pays to speak English” – A 2006 study by economists Munshi, Kaivan and Mark Rosenzweig found that, in India, speaking English gave workers a 25 per cent premium in wages over non-English speaking workers.

The aim of this book is to help you understand the mechanics of writing and speaking well in English in flat 10 days. The chapters in this book have been divided in a way that you would naturally understand the sequence, making it easy to grasp and at the same time have fun. Very few English teachers know this technique of aligning the lessons with the thought process of students.

When you are in school or college, your English teacher took pains to make you understand so many rules of grammar that it is impossible to apply them consciously in a day to day situations. You don’t have to learn 100 grammar rules. Once you know some three or four rules, English will become entertaining for you.

The first step in learning English is not noun or pronoun or adjective or adverbs or verbs. That’s the wrong way of learning English grammar. So, what is the first step to learn English grammar? The subject of a sentence. The subject is a hero of a sentence because it is about this hero you talk about in the sentence. Every hero needs to perform some action. This action is called verb. Identifying the real verb and matching with the subject is the start of a journey towards becoming a master. 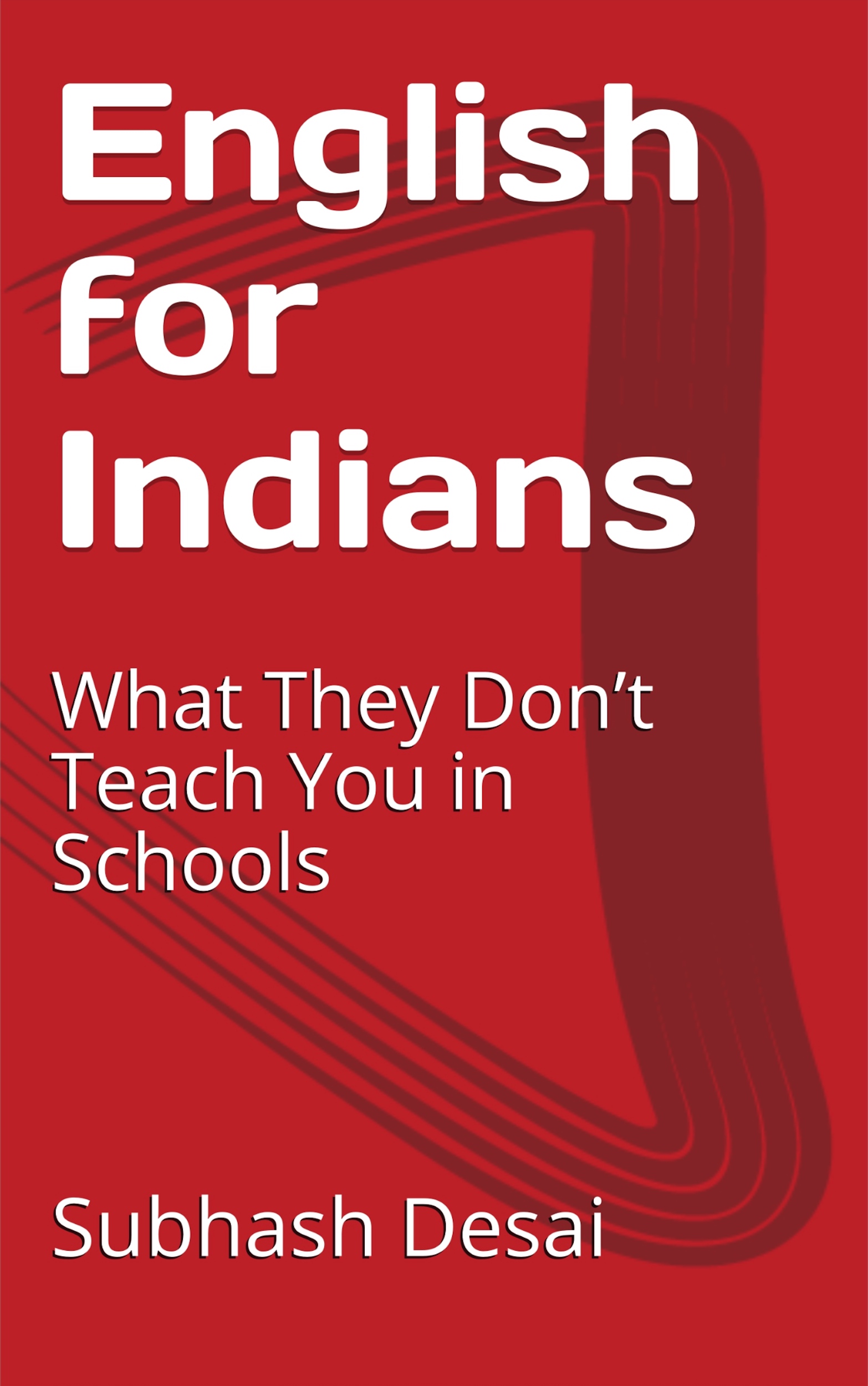 The book is written in a story format – a kind of novel!
Three friends – Archana, Rajesh and Archit –fail to clear first level interviews in their dream companies. Archana is a B.Tech graduate and she has been working for a small IT company for close to two years but she finds herself stuck. Like many of her friends, she wants to get into big companies but every time she gets rejected for the lack of communication skills. She scored good marks in academics but her ability to form correct sentences during the interviews was lacking. She is frustrated and she is desperately looking for help.
Rajesh is no different. He completed his MBA two years back and since then he is jobless. The reason? He is failing in every interview he attends. He knows for sure that he is lacking in his communication skills. It is not that he hasn’t tried to learn the grammar and sentence formations, but it is just that he hasn’t been able to apply the grammar rules. He sees so many of them that he gets overwhelmed.
Archit sails in the same boat as Rajesh and Archana. But the only thing is Archit is smarter of the two. He finds out a coach for himself and stays a bit ahead of the two. Now the story is all about how Archit helps his friends and how the coach transforms the trio from the state of butler English to sophisticated English. The book is written in the story format so that you learn the language in the most joyful way. As you read this book, you will get into one of the characters and evolve along with them to a stage where you will catch yourself grammatically correct sentences.
The 10-day crash course gives you an insight several other aspects of English grammar which you would never have learnt in your formative years. After you are done reading this book, you will be in a position to pick grammatical errors in newspapers and you will be able to explain why it is wrong. Grammar is fun and beautiful only if you know how to learn the right way.
Let’s see what happens on the Day 1:
At 11:30am sharp, the three friends meet at Alok’s place in Hi-Tech City, Hyderabad. As they are ushered in by his wife, dressed modestly, Rajesh and Sangeeta are stymied by the choice of wall colors and decorations inside the house. Alok’s wife Neetu is dressed just fine to look like a south Indian, although being a Punjabi herself.
A tall, thin man towering over everyone walks in and introduces himself as Alok. Rajesh and Sangeeta are of moderate height of five foot three inches, while Archit is five foot nine. Alok asks them to follow him to his studio room where he spends most of his time coaching students. He has a habit of smoking and keeps the balcony area free from any disturbance. He loves to write as he smokes.
“Okay, I know Archit. Can you two introduce yourselves?”
Rajesh looks at Sangeeta and nods for her to go first.
“Myself Sangeeta and I’m a native of Guntur in Andhra Pradesh and I work very hardly. My father he run a business in Guntur, and I and my brother are the only childrens. I completed my B.Tech from SKS College and looking for a job change. My hobbies are watching TV and reading books.”
Hearing this, Alok doesn’t react much. In his mind, he is trying to figure out where Sangeeta is going wrong.
“You know, Sangeeta, where you are going wrong?”
Even before Sangeeta utters a word, Alok continues…
“You are going wrong on two counts – one is the sentence structure, and the second is the usage of words/phrases. The plural form of child is children. So, you cannot say ‘childrens.’ Also ‘he run a business’ is gibberish English.”
“Do you know ‘working hardly’ means you are barely working? If I say, I hardly visit my native place, it means I barely go to my native place. If I say, I hardly work on my priorities, it means I scarcely work on my priorities. If I say, he hardly gets up early, it means he more often than not gets up early. If I say, she hardly takes any vacation, it means she usually doesn’t take any vacation.”
Sangeeta quips: “No wonder, I’m not being hired. How do we use hardly in that case, sir?”
“Just say – I work hard, not hardly,” clarifies Alok.
Now, Alok turns to Rajesh and asks him to introduce himself.
“I’m Rajesh and belonging to Guntur. I belongs to a Agriculture family and we are three brothers. I have done my MBA with 65% of marks and looking for a job.”
“You also need to understand sentence structures and usages, Rajesh,” Alok says, adding: “Sangeeta and Rajesh, you both don’t seem to have an understanding of subjects and verbs. You cannot say ‘I belongs’… this is gibberish English.”
For Alok, this brief introduction is enough for him to understand where his acquaintances stand. Alok has been in language coaching for more than a decade and has helped many people become masters of the language.

About Book & Author
About the author
Subhash Desai

Subhash Desai worked as an Associate Editor in Silicon India, a US-based magazine focused on technology trends and entrepreneurship. Besides being a writer and editor, he has been a language coach. He was a part-time faculty at the then Andhra Pradesh High Court and trained thousands of students in English proficiency.

Besides being a journalist, he is a communications and marketing expert having worked with companies like Tech Mahindra as Head of Capability Marketing & Communications; SAP India as a Communications Specialist directly reporting to the CEO of SAP India; Satyam Computers Services as Communications Head.

With more than 22 years of experience in journalism and corporate communications, Subhash is an avid reader and is passionate about training and coaching people in the English language.

Connect on Linkedin
English for Indians

Before I set out to write this book, I researched almost all the prominent books available in the market, and I found that not even one revealed the techniques and methods that are essential to sentence formation. I made every effort to unravel the mysteries of the English language that so far have been the forte of writers.

I have always asked these two questions to myself:

I worked as a journalist for over a decade before switching to corporate and marketing communications. During my journalism days, I used to write sentences without fully knowing where to put a full stop and a comma. It was not until I took up a job as a trainee subeditor in Andhra Pradesh Times, I learnt the mechanics of forming sentences.

I claim the methods in my book are self-developed, and I hope this book will help you master the fundamentals of the English language.

Any suggestion or criticism is welcomed! Send your reviews to subdesai@gmail.com

I like the way it is written. I have read several books, but seldom come across the one that is presented in such a lucid fashion. If you read this book, one thing I can guarantee is that you will never make basic mistakes either in writing or speaking. Well done, Subhash sir.

I have read so many books on English grammar, but this is very different and easy to comprehend. This book is specifically for those who know how to write but are not confident of grammatical syntax. I agree with the author that the most important part of a sentence is identifying a subject and its verb. What I liked most about this book is that the author has given some good techniques to identify a subject and verb.

The book is written in a very simple and easy to understand language in a novel style. I read this book like a novel and at the same time learnt so many techniques about forming a sentence. Now, I know why a sentence is incorrect. Earlier I was just writing a sentence without realizing whether it is correct or not. Thanks to Mr. Desai for coming up with this beautiful book.

I am Ashokkumar from Andhra Pradesh, I have read the book English for Indians , I have bought this book from online, it is very excellent book, like a novel very interesting, the communication skills without any hesitation, the three persons have learnt within 10 days is excellent, Alok sir techniques of grammar is simply superb, very useful and simple to learn, I have read so many books about grammar, but it is different, I have suggested the book to my friend, he asked me weather it is available in book store, finally English for Indians is very valuable and useful, if you have any books like this please suggest...... Thank you very much..

Let us know what you think

If you have any questions, please write to subdesai@gmail.com or call 8978681081